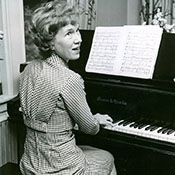 Bacon spent 1967-68 in Hungry learning about the Kodály method of musical instruction at the Liszt Academy and the Orff Institute. After returning, Bacon founded Kodály Musical Training Institute in Wellesley in 1969, and the Kodály Center of America (KCA) for graduate level teacher training.

Bacon’s list of honors also includes: Outstanding Achievement Award from the Organization of American Kodály Educators in 1989, medals from the Hungarian government in 1983 and 1989, and the Dana Hall Distinguished Alumna Award in 1990.